What should Georgia do for candidate status? 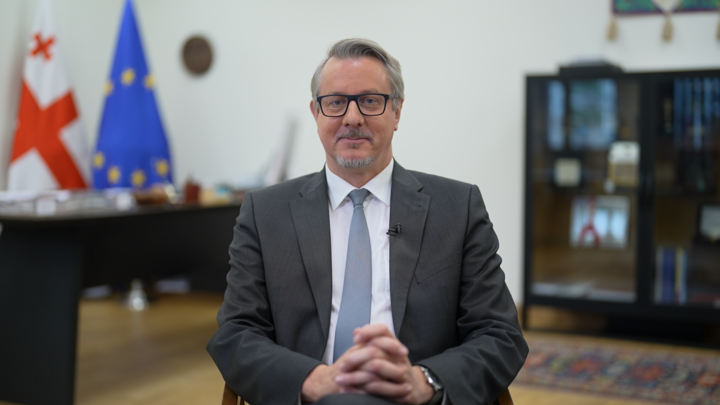 Ambassador of the European Union to Georgia Carl Hartzell answered the questions of the media and citizens. According to the Ambassador, now it is Georgia's turn to achieve progress in this regard as soon as possible.

To what extent was the refusal to grant Georgia candidate status at this stage connected to the fact that there are no military operations in our country?

- The Commission assessed Georgia, Ukraine and Moldova on their own merits and based on set criteria. The presence of military operations is in no way such a criterion.

The European Union has been Georgia’s strong partner since the early days of independence. Over the past decades, we have invested great financial and human resources to help Georgia advance on its European path. And just recently, the European Union officially recognised Georgia’s European perspective, which is a great achievement on which to build further.

Is there any truth to claims that the West wants to see Georgia being dragged into the Russia-Ukraine war, and that this has had an impact on the Commission’s Opinion?

- Absolutely not, and I am really disappointed to see those trying to make such false claims, whether directed at the EU or the US.

As you will have seen, from day one of Russia’s unprovoked and unjustified war in Ukraine, the EU has been working hard with partners to put an end to these atrocities, and to bring a just peace to Ukraine and its population. At no point in the past, or in the future, has or will the European Union want to see this war spreading further.

Is there a timeline for Georgia to join the EU?

- Becoming a member of the European Union is not something that happens overnight, but is subject to a thorough process over several years, involving substantial work across all membership criteria.

The pace of accession depends on the progress of reforms, first and foremost in the fundamental areas linked to the core values of the European Union, including the rule of law, democratic institutions and human rights for all.

Right now, Georgia is encouraged to address the 12 priorities outlined by the European Commission in order to receive candidate status and advance the process further.

Will the EU accept Georgia before Turkey?

There is no clear, pre-defined timeline for any potential candidate or current candidate country.

The speed at which Georgia moves forward is in the hands of the Georgian government. The Opinion sets out what the next steps are, and the key priorities that need to be addressed are well within reach.

The European path remains a merit-based process, which closely follows progress in key reforms. There are no shortcuts to membership: only tangible progress will succeed in driving the process forward.

EU decisions on future steps will continue to be in the hands of its Member States, who take decisions with unanimity on these matters.

Do you think the 19 April Agreement should be brought back as a step towards addressing the 12 priorities?

- It is not accidental that the Commission speaks about “the spirit of the 19 April Agreement” in its Opinion, as it set an example for the type of cross-party work now needed. The parties will now have to sit down and agree on the way forward, and the 19 April Agreement remains a good starting point on both process and content.

The resolution of the European Parliament directly mentions the release of Nika Gvaramia and the transfer of Mikhail Saakashvili as key for Georgia’s European integration. Would you agree that giving Georgia candidate status is only possible after the release of both?

- It is not my mandate to speak about the merits of individual cases. In general terms, upholding the rule of law is of critical importance for any democracy. The same goes for Georgia. There should be a widely shared perception and assessment that the courts are free and fair and that justice is carried out in a thorough and unbiased manner.

These cases took place against the background of the EU having already advised Georgia for some time to set higher standards related to the independence, transparency and impartiality of the judiciary in line with internationally recognized norms. And you see such calls again reflected in the Commission’s Opinion.

The EU maintains that it is the responsibility of Georgia to make sure that all legal cases, including those against Mr. Gvaramia and Mr. Saakashvili, follow the highest standards and that fair rules and due process are applied.

We are closely following the health conditions of the former President, and have insisted on the authorities’ ultimate responsibility to uphold his rights as a prisoner, his proper health treatment, and right to fair trial.

Mr. Gvaramia’s case follows the same principles. This case also raises issues regarding media freedom, which is seen in Georgia to have come under stress as of late.

What does “candidate status” actually mean? Does that mean a country has access to special programmes for example? Are there other benefits?

- Once a country’s European perspective has been recognised, obtaining candidate status is the first official step in the accession process and a precondition to advance further.

However, a candidate status does not entail any automatic access to additional funding compared to countries having the European perspective.

If Georgia receives candidate status by the end of the year, what will the country have to do then?

There is an established procedure for the next steps after having received candidate status, based on established practise. The Council will then need to decide on opening negotiations with Georgia on various chapters of law, based on the so-called screening process – to determine what differences exist between Georgian laws and those of the EU and how harmonisation should be done. During the negotiations, Georgia will also need to demonstrate that its administrative capacity is sufficient to implement and uphold these laws.

During the time where the Government of Georgia was working on the questionnaire sent by the European Commission, I heard that they set up a special working group. Do you think a similar group should be set up to work on addressing the priorities outlined in the opinion?

- The European Commission has presented its Opinion, which includes 12 clear priorities for Georgia to address. It is not the European Commission’s role to suggest or, even less, impose specific structures or measures to move ahead. This is now fully within the Georgian Government’s responsibility and sovereign choice, while the need for cross-party interaction and proper involvement of civil society in decision-making processes are highlighted as priorities in the Opinion.

How do you assess the current position of both the government and the opposition forces, and to what extent can this path lead to depolarization?

So far, we have seen ideas presented by the ruling party, civil society organisations, and others, which to me look like elements that could usefully be combined to set out a broader, common agenda for the work ahead. The government has a special responsibility in this respect, but all sides have to assume responsibility for the depolarisation process

If you are familiar with Georgia’s history and respect its traditions, why do you ask the Government to approve same-sex marriage?

- The EU does not ask of Georgia to approve same-sex marriage. Within the EU, family law is the competence of EU countries and, therefore, rules pertaining to marriage are defined by the EU Member States individually.

What the EU demands of all its Member States is non-discrimination and the protection of all minorities, including sexual minorities. Respect for human rights, including the rights of persons belonging to minorities is a fundamental EU value, based on our firm belief in the principles of human dignity, freedom, democracy, and equality, which need to be upheld in order to join the EU.

Should the Government protect Tbilisi Pride in order to receive candidate status?

- Protecting citizens from violence and ensuring every person’s right to freedom of speech and assembly, are core values of the European Union and, arguably, of any democracy.

It is the responsibility and duty of law enforcement to uphold these rights without exceptions. The readiness and capacity of authorities to protect those rights for all citizens, including for minorities, will be assessed in the context of Georgia’s EU accession process.
EU Membership Questionnaire Carl Hartzell