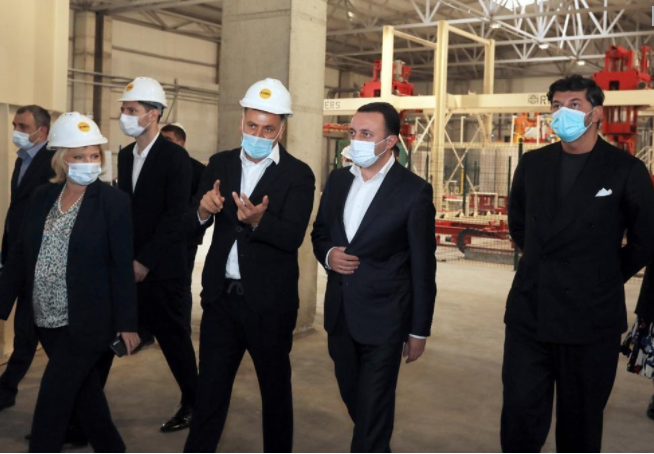 The famous German company YTONG runs about 100 enterprises around the globe, and one of them will operate here in Georgia to cover the entire South Caucasus region, Georgian Prime Minister Irakli Garibashvili stated at the opening of a YTONG factory in Lilo Settlement.

According to the Head of Government, the project, with its value making up 55 million GEL, was implemented with engagement from the Government, the Partnership Fund, and various businesses and banks.

"I would like to congratulate all of you on this day, a day to remember in that we are witnessing the opening of a very important hi-tech manufacturing facility. Of course, we are all excited about it, because our main goal and objective has always been and will be to promote and develop local production and business, and to create new jobs in Georgia. Mister Tsulaia mentioned Produce in Georgia, a program launched by us in 2014, a very successful one with at least a billion GEL already invested, about 100 million from our Government, also about 20,000 new jobs created. Over 100 enterprises have been financed. And one of the key characteristics of this day and this enterprise is that it involves YTONG, a prominent German company running about 100 enterprises around the globe, and one of them will operate in Georgia to cover the entire South Caucasus region. I congratulate Mister Tsulaia and the investors on the completion of this project that has cost 55 million GEL. A very important project has been implemented with assistance from our Government, the Partnership Fund, and various businesses and banks. 200 people will work here, 200 new jobs will be created by this project, to manufacture about 30 million GELs' worth of hi-tech products a year. As mentioned earlier, we are talking about hi-tech manufacturer from Germany producing energy efficient building materials, one of the priority directions in our modern world. Once again, I congratulate you, and I wish success and more thriving projects like this, and more new jobs, to the company," Irakli Garibashvili said.

YTONG is a German brand, the world's largest manufacturer of hi-tech building materials for 100 years now.
Presently, YTONG runs over 100 factories around the world. The new factory in Tbilisi will cover all of the South Caucasus.

The factory has opened under the Enterprise Georgia state program, with 500 million GEL invested in all, and about 200 new jobs to be created.

The YTONG factory will manufacture 30 million GELs' worth of hi-tech products a year, to be exported in near future.

The event was attended by Minister of Economy and Sustainable Development Natia Turnava, Tbilisi Mayor Kakhi Kaladze, Founder of Archi Ilia Tsulaia, and representatives of the legislative branch, the diplomatic corps, and the business community.