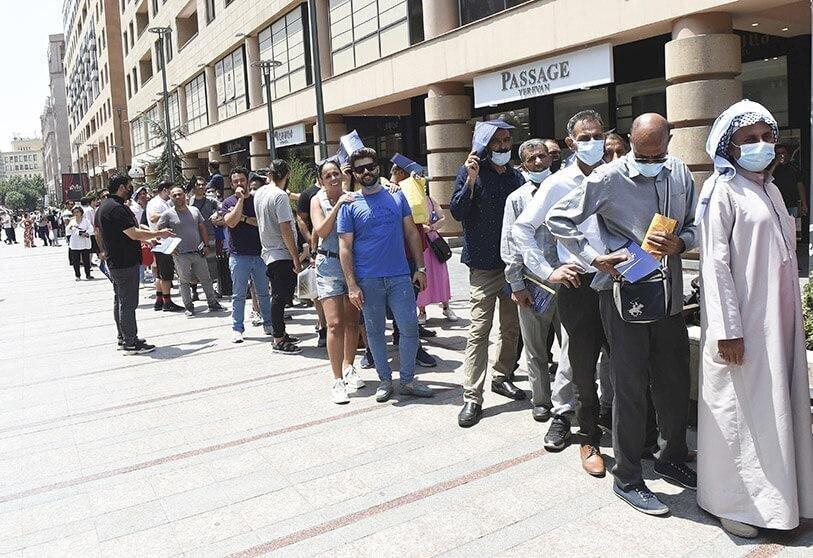 Since the beginning of the vaccination program, as of July 18, 131,080 people have been vaccinated, of which 94,560 received the first dose, and 36,520 have gotten vaccinated with both, www.jam-news.net reports.
These are general figures that include both citizens of Armenia and foreigners – mainly Iranians, for whom Armenia has become the main destination of the so-called “vaccination tourism”.
Why do Iranians get vaccinated in Armenia?
The Ministry of Health of Armenia does not keep separate statistics on the vaccination of foreigners. The picture is clarified by the data provided by the Committee on Tourism. In March 2021, 4,953 Iranian citizens arrived in Armenia, and in June their number has already doubled and amounted to 8,597 people.
Getting vaccinated in Iran is currently quite hard, as only risk groups can be vaccinated for free. Those include citizens over 60 years old and people with chronic diseases. The rest will have to wait at least another 5 months.
In addition, in Iran, only one, locally produced vaccine is being used. The Anglo-Swedish vaccine AstraZeneca, Russian Sputnik V, or the Chinese CoronaVac, approved by the World Health Organization, are not used in Iran. On top of that, those who get vaccinated there are not issued an appropriate international certificate.

Vaccination of foreigners in Armenia

In order to avoid queues in district polyclinics, vaccination of foreigners is now carried out only at mobile vaccination points located on several streets of Yerevan. Foreigners are vaccinated only with the AstraZeneca vaccine – up to 50 people a day.

In order to prevent large gatherings of people at mobile points, the Ministry of Health launched a system of preliminary electronic registration which divides those who wish to get vaccinated into three groups:
citizens of the Republic of Armenia, those who have a residence permit in Armenia, and foreign citizens.

The system sets the hour of vaccination, giving priority to the citizens of Armenia, regardless of when they stood in line, then those who have a residence permit, and at the very end – foreigners.
Will there be enough vaccines?
Gayane Sahakyan, Deputy Director-General of the National Center for Disease Control and Prevention and Head of the National Immunization Program, explains why the decision was made to vaccinate foreigners.
First of all, according to her, the decision was made due to the fact that the ministry received many applications from foreigners working in diplomatic missions and other international organizations. Moreover, they could not leave Armenia and get vaccinated in their countries due to the epidemiological situation.
“At first it was necessary for us too, because Armenia is somewhat different from other countries. We had few people willing to be vaccinated, people were rather passive. At the same time, there were many foreigners wishing to be vaccinated who work on long-term contracts. By vaccinating them, we kept control over the epidemic situation in the country”, says Gayane Sahakyan.
In addition, she assures that there is no reason to worry about the lack of vaccines ․ The Ministry monitors the number daily, calculates the number of doses consumed, and negotiates with manufacturers to ensure that the required amount of vaccines is always available. Thus, the citizens of Armenia will not have any problems because of the vaccinations received by foreigners.
Vaccination at the expense of the state budget
In previous months the government presented its decision to vaccinate foreigners at the expense of the state budget as a humanitarian step but today it is already talking about the economic efficiency of this step.

By order of the Minister of Health, from July 15 only those foreigners who have spent at least 10 days in the country will be able to get vaccinated free of charge in Armenia.

Thus, the government is trying to revive the tourism industry, which is most affected by the coronavirus.
“Tourism indicators could grow by 319%. Now is a good time to think about medical tourism”, said the acting Minister of Economy Vahan Kerobyan.
Economists explain that the Armenian government spends $ 20-30 on the purchase of one dose of the vaccine, while a tourist in Armenia spends an average of $ 70-100 per day.
On top of that, the same foreigners must return to Armenia in 2 months to receive the second dose of the vaccine.
Iran armenia Covid19 covid19 vaccine