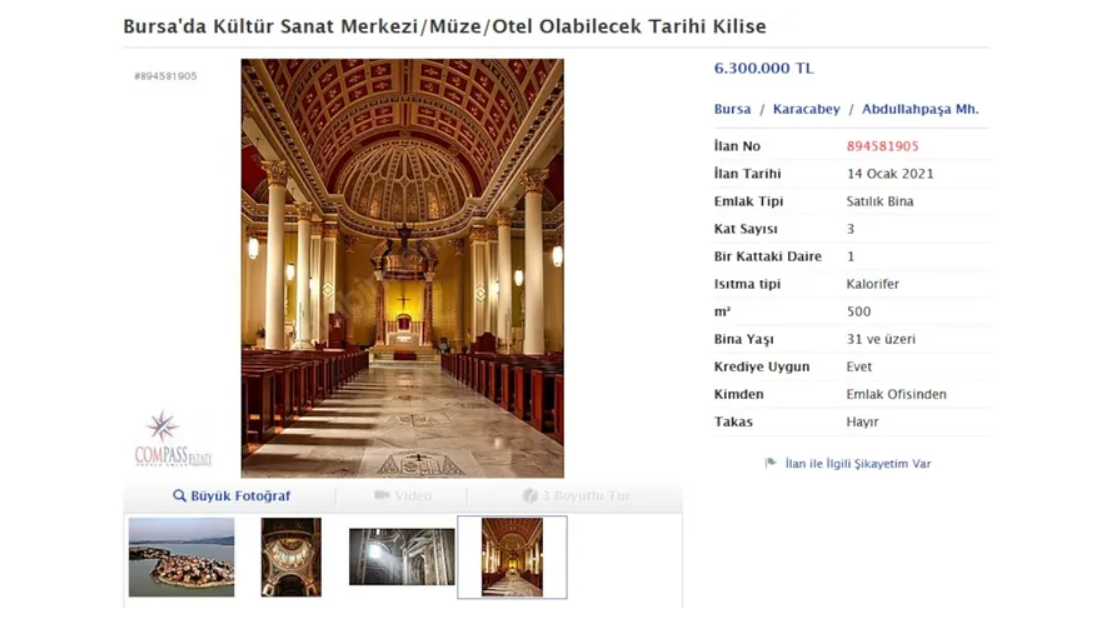 Back
An Armenian Catholic Church in Bursa, a city in northwestern Turkey, has been displayed for sale for US$ 847 000 (6.3 million Turkish liras). People not only in Armenia but also in Turkey has reacted to the fact with indignation and disappointment.
According to Public Radio of Armenia, an advertisement published at sahibinden.com, online classifieds and shopping platform, is titled “Historical church that can become a culture and art center/museum/hotel in Bursa”.
The website notes that the church, which was built for the Armenian population in the region, passed into private ownership and had been used as a tobacco warehouse since 1923 and then as a weaving factory.
It adds that the church, located in a region included in the UNESCO World Heritage List, can be used for touristic purposes.
Member of the Turkish Parliament from HDP Party, ethnic Armenian Garo Pylan, has slammed the decision.
“Armenian Church for sale in Bursa. Can the place of worship be sold? How can society and state allow this? Shame on you!,” Paylan said in a Facebook post.
The fact has raised concerns and anger not only among Armenians, but also among Turkish people.
According to jam-news.net many Turkish social media users have reacted with outcry and disappointment:
“It is written: ‘Located close to the center.’ They would also write: ‘Close to the bus stop.’ What kind of attitude is this to a historical buildings? “
“This cannot be allowed. Historical buildings, especially those used for religions, cannot be sold by private individuals. The state must intervene in this matter. If there are interests of a private person, they should be compensated for the losses, and such buildings should be protected.”
“I can imagine the reaction in the country if a mosque building was put up for sale somewhere. That would be history.”