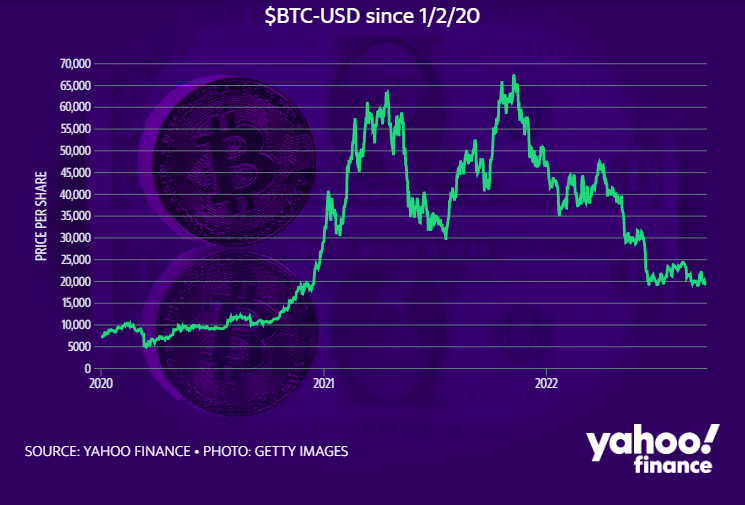 Bitcoin dipped below $19,000 early Wednesday, continuing a week-long sell-off among cryptocurrencies, as crypto investors brace for the Federal Reserve’s interest rate hike decision in the afternoon.

Analysts consider bitcoin’s summer low of $17,708 on June 17 as a key testing point for where the asset could trade following the central bank’s key decision.

Changing hands at $18,990 per unit Wednesday, bitcoin has sold off 1.49% over the last 24 hours. It's lost 6.7% in the last seven days and 59% year to date after being dubbed the best-performing asset of the decade a year and a half ago.

On Wall Street, the consensus expectation is for a 75-basis-point rate hike on Wednesday with few investors anticipating a positive short-term outcome for cryptocurrencies.

The growing strength of the dollar over the past year has proved a great pain for bitcoin as the emerging asset class altogether is “very sensitive to rate increases” said Edward Moya, a senior market analyst at Oanda.

Up 15.25% since the beginning of January, the U.S. dollar (DX-Y.NYB), continues to strengthen to highs not seen for 20 years.

“Now bitcoin is searching for a bottom,” Moya told Yahoo finance, adding the most bearish investors are anticipating the coin to fall as low as $10,000. “But the bigger question is whether or not it will retest summer lows and I think that’s possible.”

At its summer low, bitcoin still carried 4 times its value from five years ago ($4,403). Meanwhile, the total crypto market capitalization as swelled by 85% from $133 billion to $927 billion — though still small by institutional investor standards.

Quant asset management firm IDX, which has moved all its crypto holdings back into cash, isn’t planning to re-enter the market any time soon.

“We’re very much in a risk-off posture and we have been for a while,” Ben McMillan, the company’s founder and chief investment officer, told Yahoo Finance.

Created during the financial crisis, bitcoin was introduced as money for the internet, specifically the first peer-to-peer electronic cash system outside of the reach of governments.

Over the years, its popularity among goldbugs, followers of Austrian economics, Silicon Valley tech elites, and risk hungry investors has put it on Wall Street's and global policymaker's radars.

While crypto's total market cap value has sold off by two-thirds since its peak last November, institutions are still seeking opportunities in the space with Nasdaq launching a digital assets business as recently as Tuesday morning.

Like other investors, IDX's McMillan is taking a historic view on how crypto is currently trading, likening it to a speculative technology stock during the "dot-com" boom when the era's best and worse performers looked identical on a chart.