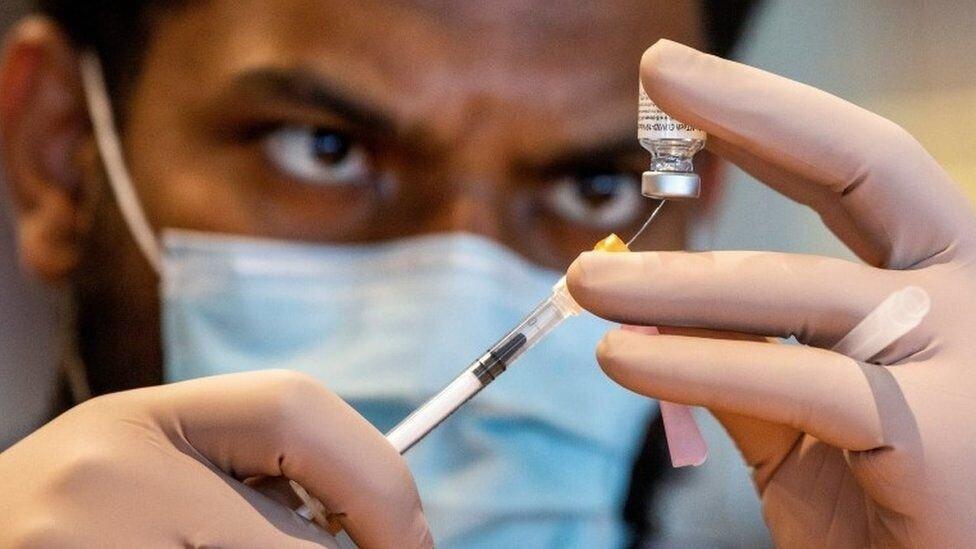 Back
The US has thrown its support behind a move at the World Trade Organization (WTO) to temporarily lift patent protection for coronavirus vaccines.
India and South Africa proposed the plan, which they said would increase vaccine production around the world.

But drugs manufacturers argue it may not have the desired effect.
US Trade Representative Katherine Tai said that "extraordinary times call for extraordinary measures".
Ms Tai said the US would now embark on negotiations at the World Trade Organisation (WTO) to try to secure the waiver, but warned this could take time.
One hundred of the WTO's 164 states are said to be in favour, and a panel on intellectual property is expected to discuss the issue next month.
India and South Africa were the leading voices in a group of about 60 countries which for the last six months has been trying to get the patents on vaccines set aside.

However, they met with strong opposition from the previous US administration of Donald Trump, the UK and the EU.
But Mr Trump's successor as US President, Joe Biden, has taken a different tack. He backed a waiver on intellectual property associated with Covid vaccines during the 2020 presidential campaign and repeated his support on Wednesday.
Reacting to the latest US move, the European Commission President Ursula von der Leyen said "the EU is also ready to discuss any proposals that address the crisis in an effective and pragmatic manner".
The head of the World Health Organization called the US announcement a "monumental moment" in the fight against Covid-19.

Shares in the pharmaceutical companies Pfizer, Moderna and Novavax, fell in Europe after the US announcement.
What is intellectual property?
Intellectual property describes creations, such as inventions, which are protected by patents, copyrights and trademarks. These prevent copying and allow the originator to be financially rewarded.
Patents give innovating firms a short-term monopoly on production to cover the costs of development and encourage investment.
Biotech firms argue that such protection has provided incentives to produce Covid vaccines in record times.
What would the waiver mean?
If approved, supporters say, the waiver would allow production of vaccines to be ramped up and provide more affordable doses for less wealthy countries.
Many developing countries have argued that rules requiring countries to protect patents and other forms of intellectual property are an obstacle to increasing the production of vaccines and other products needed to tackle the pandemic.
Tedros Adhanom Ghebreyesus, head of the WHO, called the US decision "historic" and said it marked "a monumental moment in the fight against Covid-19".
The medical NGO, MSF - Doctors Without Borders - said the move would "increase sufficient and timely access to these lifesaving medical tools as Covid-19 continues to ravage countries across the globe."
Calls for a vaccine patent waiver come as lower income countries face acute vaccine shortages.
MSF points out that many of the low-income states where it operates "only received 0.3 percent of global Covid-19 vaccine supply while the US has secured enough doses to protect its entire population".
India, which was shipping vaccines to other countries, has now had to cancel exports as it grapples with surging coronavirus cases and falls behind on its vaccination targets.
But pharmaceutical companies have voiced their opposition to waiver, insisting that patents are not the primary obstacle, and cautioned that the move could stifle innovation.
The head of the International Federation of Pharmaceutical Manufacturers and Associations, Thomas Cueni, told the BBC's Today programme that technology transfer should not be enforced.
"I'm deeply concerned if you hand this over and allow companies to try to get it done the right way, safe and high quality, you could compromise the quality and safety of vaccines which we see now and it would be disruptive."
He said Western pharmaceutical companies were already sharing technology on a voluntary basis.
"The bottlenecks right now are trade barriers, preventing companies from moving their goods from one country to another. It is shortages and scarcity in the supply chains, which need to be addressed.
And it is also right now the disappointing unwillingness of rich countries to early share doses with the poor countries.
"None of this is addressed with the patent waiver."
Dr Amesh Adalja, senior scholar at the Johns Hopkins Center for Health Security, told the Reuters news agency that the waiver "amounts to the expropriation of the property of the pharmaceutical companies whose innovation and financial investments made the development of Covid-19 vaccines possible in the first place".
Some experts say pharmaceutical companies would also need to share know-how, such as production techniques, with poorer countries to have any real beneficial effect.
Licensing agreements are another way of boosting production.
One of the largest Covid vaccine producers is the Serum Institute of India which manufactures the Oxford-AstraZeneca jab under a licensing agreement with the Anglo-Swedish company.
Source: BBC
Covid19