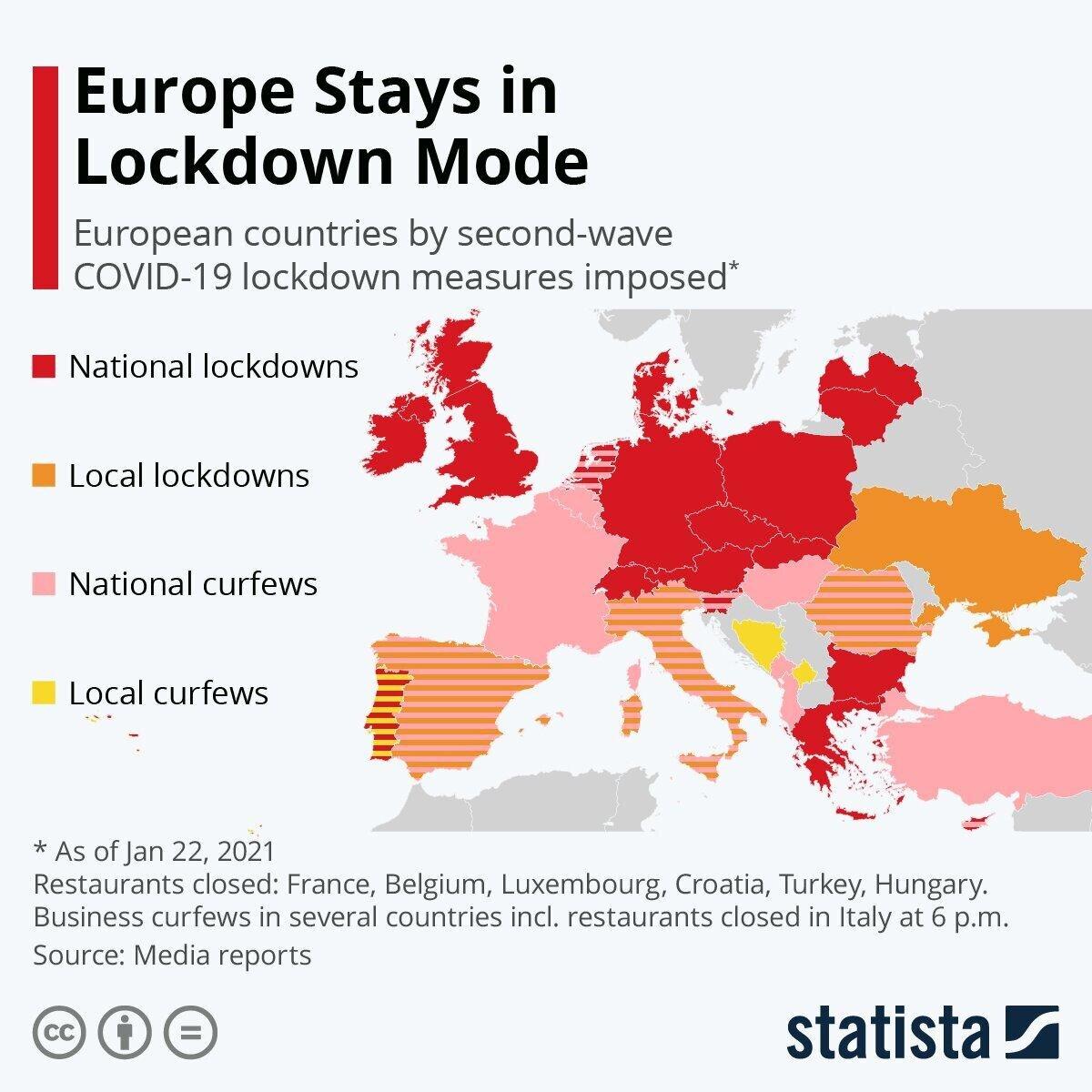 Back
In early 2021, COVID-19 restrictions remain in place across Europe. Yet, reluctance to go into a full-fledged lockdown has some countries apply a hodgepodge of restrictions just short of the real deal.
Spain and France, where a second wave of infections spread from mid-July, led the way by imposing lockdowns as early as October.
France has since come out of lockdown and switched to an early national curfew supplemented by restaurant closures - a tactic which is currently also applied in Belgium and Luxembourg.
Spain has stuck to its national curfew and localized lockdown system stubbornly despite case numbers rising swiftly again in what has been called a third wave of infections. Italy, where cases started rising quickly in October, is under the same regiment, while adding early restaurant closures at 6 p.m. into the mix.
More national curfews have been implemented in less-affected parts of Eastern and South Eastern Europe, for example in Hungary, Romania, Turkey and Albania.
Despite rumors, a curfew has not yet been implemented in Germany. The country implemented a national lockdown on Nov. 2, shortly after the spread of the virus accelerated, but failed to close non-essential shops until mid-December.
The UK and much of Central Europe followed suit by imposing national lockdowns again, even though places like Scotland, Bulgaria and Denmark were latecomers. Switzerland closed down as late as January 15 and also keeps schools open, as does Portugal.
Switzerland, which has developed a reputations for skirting some restrictions, also allows ski resorts to operate. This has led to conflict with neighboring France, where they were ordered shut.
As with the first wave of lockdowns, enforcement varies significantly between countries, with Germany merely urging residents to stay at home, while more stringent checks are customary in Spain and France.
Some more creative solutions have come out of Cyprus and Greece, where the frequency of shopping trips has been restricted majorly with the help text message codes. Scandinavia has not yet imposed major restrictions.
Norway, for example, allows indoor gatherings of up to 200 people, but only if distancing measures are adhered to and chairs are bolted to the ground for extra safety.
In locked-down Slovakia, a valid reason to leave your home is - like elsewhere - to walk your dog and - surprisingly - also to walk your cat.
Source: Statista
Covid19 lockdown Europe