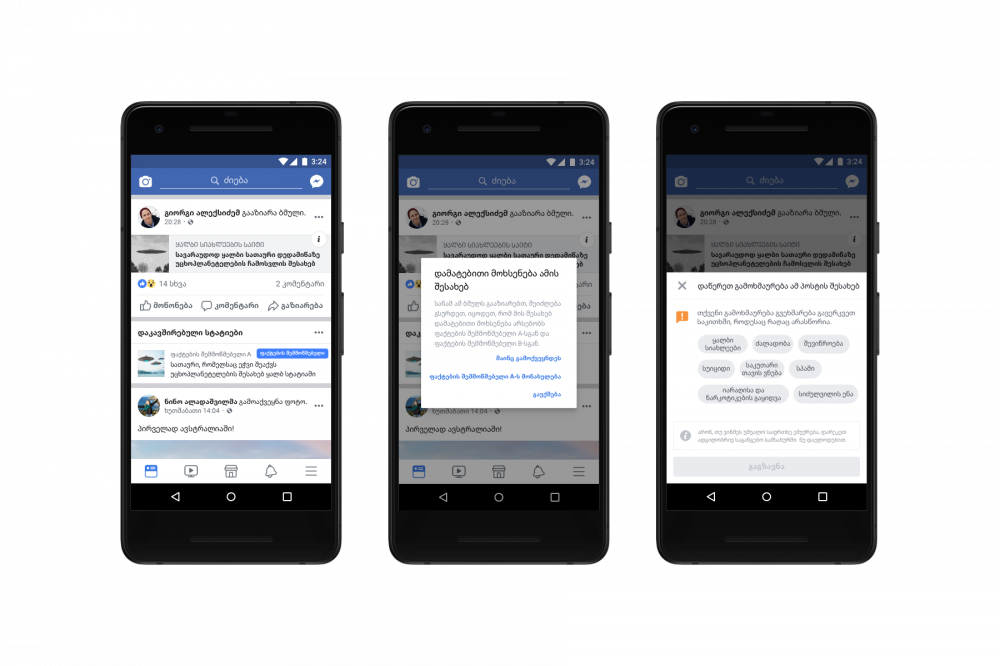 As part of Facebook’s fight against misinformation, we partner with independent, third-party fact-checkers around the world, who review and rate the accuracy of content. Today we're announcing the launch of our third-party fact-checking program in Georgia with FactCheck Georgia and Myth Detector. Both our partners are certified through the non-partisan International Fact-Checking Network.

When a fact-checker rates a story as false, we show it lower in News Feed, significantly reducing its distribution. This stops the hoax from spreading and reduces the number of people who see it. Pages and domains that repeatedly share false news will also see their distribution reduced and their ability to monetize and advertise removed. And when a post has been marked as false, we warn people who see the post or try to share the post that it has been marked as false.

“We're happy to launch our third-party fact-checking program in Georgia with FactCheck Georgia and Myth Detector. Fighting false news is a responsibility we take seriously, that's why we are constantly working on ways to help stop the spread of misinformation on our platform." - Sophie Eyears, Strategic Partner Development Manager at Facebook.

This program is in line with Facebook’s three-part framework to improve the quality and authenticity of stories in the News Feed, wherein Facebook removes accounts and content that violate its Community Standards or ad policies, reduces the distribution of false news and inauthentic content like clickbait, and informs people by giving them more context on the posts they see.
“Since its establishment in 2013, FactCheck Georgia has been contributing to increasing accountability, exposing misinformation and promoting the truth in Georgia’s information space together with educating the public on wide-ranging public policy issues. The partnership with Facebook gives us an excellent opportunity to make our work much more effective and most importantly, to reach out thousands of Georgian Facebook users, who are targeted with misinformation. The partnership comes a few months before the parliamentary elections in Georgia that would help us to secure the social media from viral misinformation and malign actors willing to disrupt the democratic fundamentals of elections.” – Paata Gaprindashvili, Director at Georgia’s Reforms Associates – Founder of FactCheck Georgia.

“Media Development Foundation (MDF) launched its fact-checking and myth debunking platform - Myth Detector – in 2014, to uncover truth behind the lies, explore hidden agendas and inform both people and institutions of Georgia about the impacts of disinformation.” - says Tamar Kintsurashvili, founder and Editor-in-chief of Myth Detector. -


“When pluralistic platforms and democratic institutions such as the media are abused, it’s our duty as fact-checkers to inform the public and preserve trust in credible media platforms. In a democratic society, we need to differentiate quality information from fabricated one in order to make informed choices. Expanding Facebook fact-checking program in Georgia ahead of the upcoming parliamentary elections is crucial in achieving this goal and protecting the electoral process from information pollution.”


Today, we have over 70 partners fact-checking content in over 50 languages globally, and we're investing in ways to scale these efforts further.

“You Will Be Asked for Answers!” – Prime Minister Warns Companies

Effective today, universities will resume only lab and practical classes

In 9 Months, Up to 6,500 Cases Were Settled – the National Bureau of Enforcement

Government has to make reserves of flu vaccine in spring – Chiaberashvili

It is better to stay online – Rector of Ilia State University

Outrider Management: As a Result of Mismanagement, Frontera Has Squandered a Licence

Outrider Management: We Spent Several Million Dollars in Legal Defense to Protect Our Interests in Frontera

Transactions Up by 32% in the Economy Segment, Due to the Government Subsidy Program – Colliers

Paata Imnadze: We Will Have the Peak of Covid-19 at the End of November