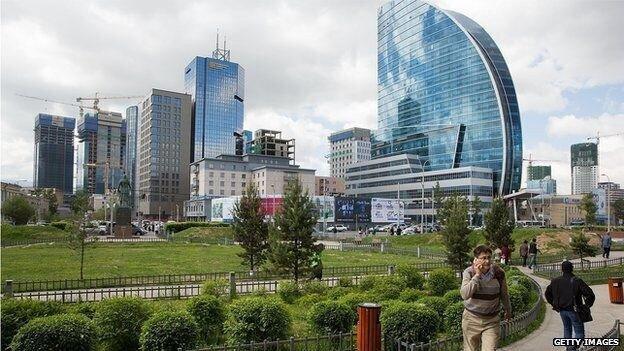 Mongolia is a frontier economy known as the land of blue sky and as the birth place of Chinggis Khan.

Mongolia is the 2nd largest landlocked country in the world, behind Kazakhstan. At present It is estimated that 600,000 of Mongolia’s 3.4 million people are nomads. Mongolia is an immense country created by chengis Khan in the 13th century.

Originally a nomadic Buddhist centre, the capital UB, became a permanent site in the 18th century. When the country fell under the control of the Soviets at the dawn of the 20th century, concrete buildings replaced yurts and the city was named Ulaanbaatar or at times Ulan Bator. Literally meaning “red hero”.

In 1911, Mongolia declared its independence, achieving it with help from the Soviet Union in 1921. Mongolia became a socialist state (the Mongolian People’s Republic) in 1924. Following independence and until the collapse of the Soviet Union in 1989, the country was a Soviet satellite state, and heavily reliant on economic, military, and political assistance from Moscow.

Mongolia, a nation bordered by China and Russia, is known for vast, rugged expanses and nomadic culture and the Mongol empire. In recent years the commodity story led to a Mongolia boom and increased interest from global investors.

According to the ADB Asian Development Bank, Mongolia’s economic growth is expected at 2.3% in 2022 compared to the 1.4% growth in 2021 and climb to 5.6% for next year 2023, supported by domestic demand, investment, and recovery in industry, agriculture and services.

OT Oyo Tolgoi mine completion and the Russian-Chinese natural gas pipeline will be major macroeconomic drivers going forward. At full production OT is estimated to provide and account for 30% of GDP for Mongolia.

Oyo Tolgoi is one of the world’s largest undeveloped copper-gold deposits located in the South Gobi region, Mongolia, and the project is managed by Oyo Tolgoi LLC, which is majority-owned by Rio Tinto

Much of what is happening in Mongolia resembles the early stages of the oil boom in Kazakhstan., only in a country with a much smaller population, and the effect and opportunity for investors could be of interest.

In 2011, Mongolia was the fastest growing economy in the world. GDP has increased from US$ 1 billion in 2001 to over US$ 11 billion just a decade later. Even compared to 2010 when I first visited the country, the Ulan Bator of 2022 is unrecognizable and has fintech IPOs on the local stock exchange. Soviet era apartments that once loomed large over the city are being outnumbered by WIFI posts in the street and new developments which include gated communities and multistorey office blocks and shopping centres like Shangri-La Ulan Bator.

Mongolia is 15 times larger than south Korea and south Korean budget airlines like Jeju Air and T’way Air have discovered Mongolia. Older Korean people have expressed a certain nostalgia for Mongolia, saying it reminded them of the times before south Korea became fully developed economic powerhouse.

Mongolia as an investment destination and local stock market MSE Mongolia stock exchange, is still a very low liquidity market and difficult to access for global investors. The country had a few international investment funds but those were most probably ahead of its time.

In geopolitics, Mongolia’s importance to the world will rise due to its being a small democratic country, geographically located next to and a buffer zone between the Russian federation and The People’s Republic of China.

Mongolia expects Russia to begin construction of the “Power of Siberia 2” gas pipeline through its territory to China within two years, as Moscow moves to connect its Europe-supplying gas fields to Asia for the first time. The war in Ukraine had clouded planning for the pipeline, Mongolia however is said to expect construction to go ahead.

The Power of Siberia 2 project has become critical to Russia as it faces the prospect of losing Europe as a market for its gas following its invasion of Ukraine and accusations it has “weaponised” supply to create a price crisis. Energy industry executives expect the timeline to accelerate due Moscow’s souring relations with the West over the war in Ukraine and the subsequent shrinking European market for its key export.

Construction of a Russian-Chinese natural gas pipeline transiting through Mongolia will begin in 2024 and is expected to go online in 2030.

MNT - The Mongolian Tughrik is the currency of Mongolia and commercial banks pay 10% to 12% on local currency deposits. Khan bank the largest Mongolian bank and considered sovereign risk is planning and preparing for an IPO on the MSE. (Mongolia stock Exchange). Analysts estimate Khan Bank of Mongolia ROE (Return on Equity) at over 20%

The country and central bank Mongol Bank maintains capital controls, limiting the amount of tugrug allowed out of the country, as well as how much can be converted into foreign currency.

The currency floats freely and has seen its value erode over the past decades relative to major world currencies. As of the first half of 2022, 11 commercial banks are operating in the market.

Mongolia will probably seek to refinance its $500m bond maturing next year; nation has taken efforts to preserve market access, such as not asking for debt relief under a G-20 initiative to avoid downgrades by rating companies. The ruling party’s victory in Mongolia’s parliamentary elections this week is considered conducive for policy continuity and may lead to another IMF funding program for the strategically important country and frontier market.