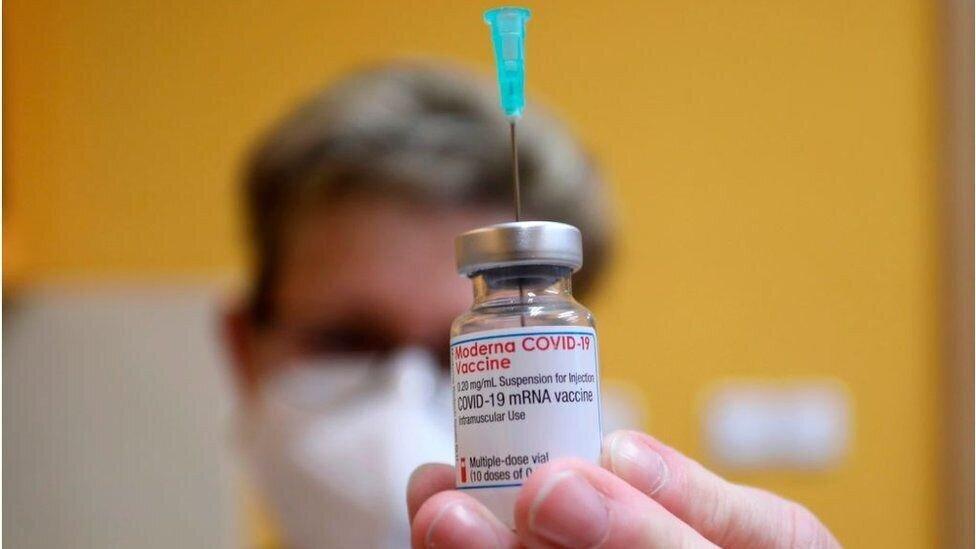 Back
European stock markets have fallen after the boss of Moderna cast doubts on the effectiveness of vaccines against the new Omicron Covid variant.
Stephane Bancel told the Financial Times he thought there would be a "material drop" in vaccine efficacy.
The Covid variant was first detected in South Africa, and the symptoms have been mild so far.
But travel restrictions have been imposed as a precaution by places including the UK, the EU and the US.
Mr Bancel predicted that existing vaccines would be less effective in staving off Omicron, and that it would take months for drugs companies to update vaccines.
"There is no world, I think, where [the effectiveness] is the same level," he said.
UK's FTSE 100, Germany's Dax, and France's Cac 40 slipped more than 1.5% each, and the pan-European Stoxx 600 dropped 1.5% to hit its lowest levels in nearly seven weeks, before they all regained some ground.

Tokyo's Nikkei index closed down 1.6%, crude oil prices fell nearly 3%, and the Australian dollar hit a one-year low.
There was also a scramble for assets that are considered to be safer in times of uncertainty, such as gold, German government bonds, and the yen.
"It's not good news, and it's coming from someone who should know," said Commonwealth Bank of Australia currency strategist Joe Capurso. "Markets have reacted in exactly the way you'd expect them to."
Markets plunged on Friday after investors were rattled by the discovery of the new variant, with the FTSE 100 index suffering its biggest drop in more than a year.
Stock markets have risen slightly since then, but are still far below last week's levels.
However, both the FTSE 100 and the FTSE 250, which is more focused on UK firms, are still substantially higher than this time last year - up about 8.3% and 9.6% respectively.
Covid19 Moderna covid19 vaccine Omicron