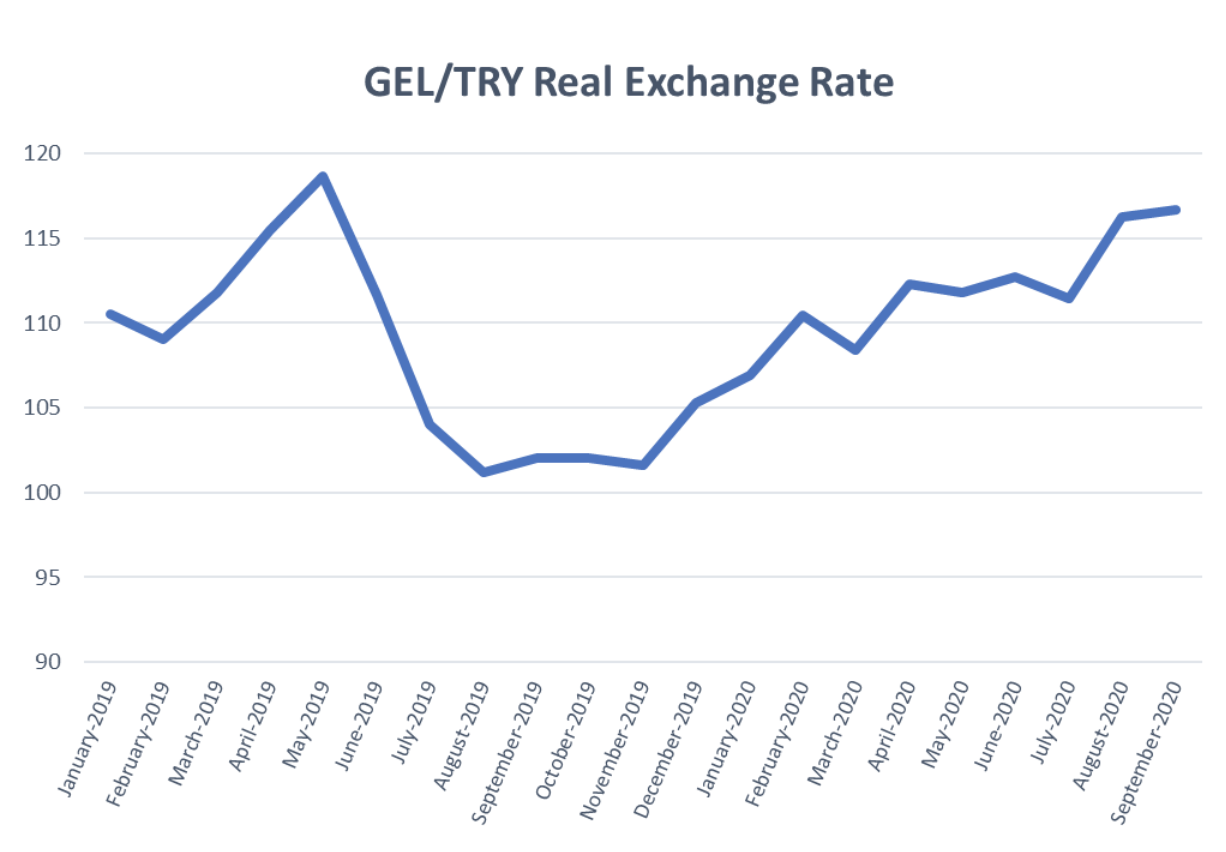 Back
Author:Madona Gasanova
The lira stood at 8.1560 against the dollar as of Tuesday, Oct 27, its weakest level on record, compared to Monday’s close of 8.0900. The currency has lost some 27 percent of its value so far this year. The depreciation of the Turkish lira against the Georgian lari could potentially have an impact on the Georgian economy through trade, remittances, and tourism channels.
Despite the notable decline of international trade during the pandemic and post-pandemic periods, Turkey remains one of Georgia's major trading partners. For example, in September of 2020, Turkey was the first partner country in terms of imports with a share of 19.2% in total imports (Turkey has remained at the top of the import table for a long time).
“The depreciation of the Turkish lira (and the accompanying appreciation of Georgian lari) in general makes imported Turkish goods (and services) cheaper and exported Georgian goods to Turkey expensive, making Georgian production relatively less competitive,” said Davit Keshelava, Senior Researcher at the ISET Policy Institute.
However, as Keshelava says, economic theory (and empirical literature) suggests that currency depreciation needs some time to be reflected in domestic prices due to the fact that importers/exporters used to have stocks of goods bought at pre-depreciation prices. In addition, the pandemic/post-pandemic periods are characterized by low economic activity that also causes transmission processes to be even slower.
The other important channel through which the depreciation of the lira can potentially have an impact on the Georgian economy is related to the money inflow from Turkey. Pursuant to Keshelava, the share of remittances from Turkey in total (on average) amounted to 14.2% in 2019 (which was 6th among all partner countries), but this share reduced to 5.9% in the first nine months of 2020. In his words, depreciation of the Turkish lira (against the USD) lowers the earnings of Georgians living and working in Turkey expressed in USD (Georgians tend to covert Turkish lira into USD or euros and send it to Georgia), which negatively affects the money inflow to Georgia.
In addition, the depreciation of the Turkish lira tends to have a negative impact on Foreign Direct Investment (FDI) and tourism. However, Keshelava believes, that these effects are limited because there are no significant investment flows expected from Turkey due to the current low level of economic activity in Turkey, along with many uncertainties for Turkish investors during the pandemic period. “Aside from that, the difficult epidemiological situation in the region and travel restrictions will make a full recovery of the tourism sector unlikely to happen in the near future”, Keshelava told BM.GE.
Lastly, despite the nominal depreciation of the Turkish lira against the Georgian lari, the lira has appreciated in real terms since the beginning of 2020 (see graph above; an increase means the real depreciation of Georgian lari).
Lari Turkish Lira