PWC Survey: In 68% of Businesses Surveyed, Revenues Fell by More Than 50% 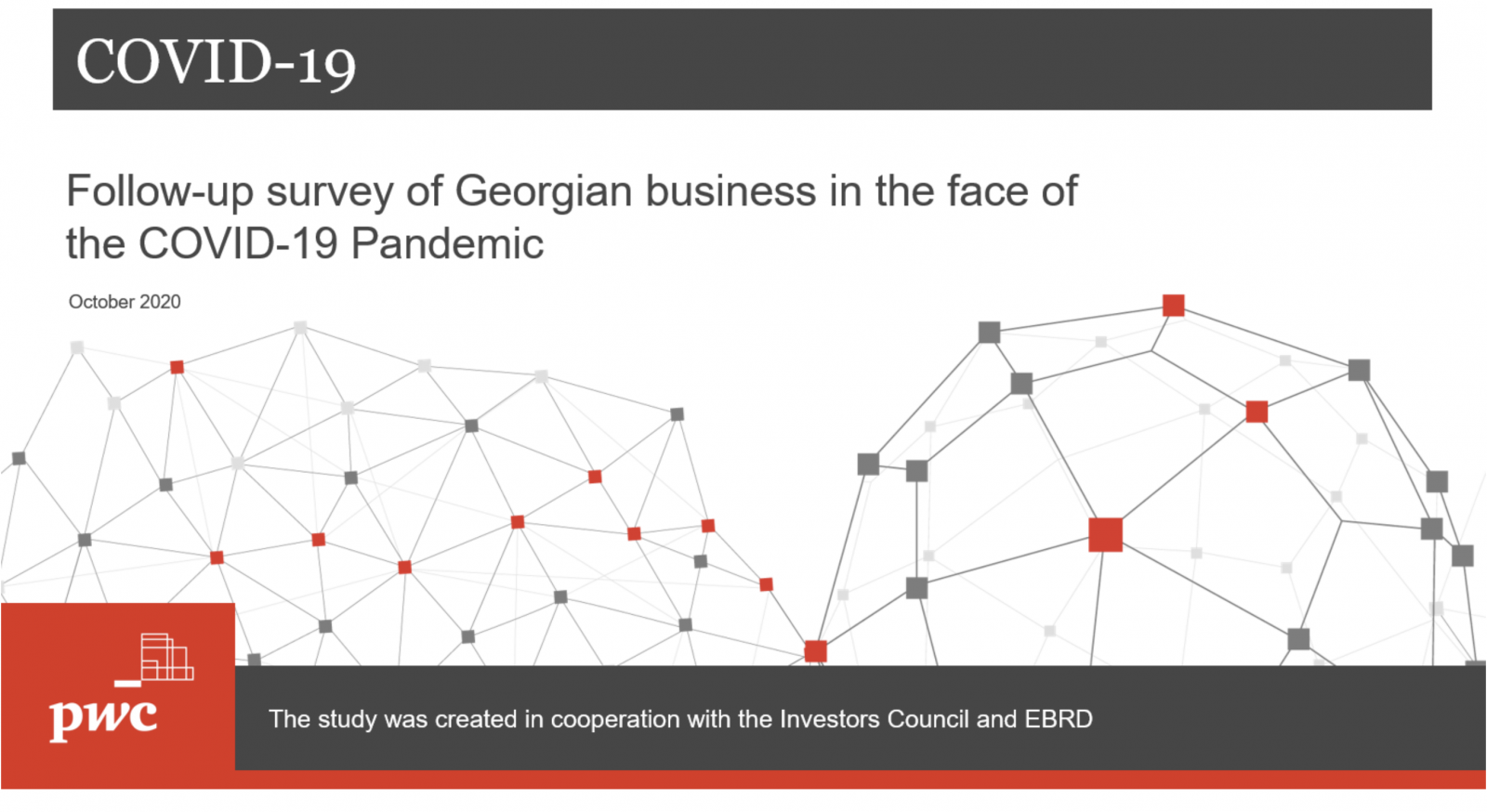 Back
PwC Georgia has published the results of an updated survey that reflects the expectations of the Georgian private sector. The study was conducted under the Investors Council and it is an update to a report published in May. The Private Sector Survey was conducted between September 11 and October 2 through an online survey of 774 businesses.
According to a published report, in 68% of the businesses surveyed, revenues fell by more than 50%.
Key Findings:

A decrease in demand remains to be the most significant side effect of COVID-19 for all sectors. The demand reduction has considerably affected the surveyed companies’ revenues, which has dropped by more than half for 68% of respondents since May 2020. This figure has slightly increased from 65% for all companies in the April survey. The closure of borders has mainly affected the accommodation and food service companies, with more than 84% of respondents experiencing significant revenue reduction. Projections from the respondents are more positive than the April’s survey, and only around one-fourth, compared to half of companies expect to have more than a 50% drop in revenue in the upcoming 3 months, compared to the same period of the last year. Almost the equal number of surveyed respondents (66%) in accommodation and food service companies still expect to have more than a 50% revenue drop.

During the current survey, other challenges have become more visible as well. The main differences from the previous survey in terms of the COVID-19 related difficulties the companies are facing are: 1) the increased issues related to the closed borders for all companies, especially problematic for self-employed respondents (39% compared to 28% in April); 2) late payments from clients for self-employed and micro enterprises (22% and 33% compared to 15% and 24% in April); 3) exchange rate-related difficulties mostly affecting micro and small-sized companies (49% and 56% compared to 39% and 49%).

The changes introduced by companies since May 2020 have reduced the pressure on liquidity. The number of respondents that already face liquidity issues has declined from 28% in April to 10% by the end of September. Large companies are the most optimistic among surveyed companies, with around 70% having no expectation of any liquidity issues in the upcoming six months. Suspension of business activity was among the most widely used protective measures undertaken by self-employed, micro, small, and medium-sized companies in the April survey and employees working from home among small, medium and large enterprises. During the current survey, all surveyed companies, except large, had to limit the size of their production. The majority of large companies enabled their employees to work from home.

Various available protective measures were used by the surveyed companies to solve their liquidity issues. Around 16% of respondents have approached tax authorities for deferment of their tax liabilities. Approximately 75% of companies were able to either fully or partially postpone their liabilities. Mostly medium and large companies have approached the financial institutions for loan restructuring and additional funding attraction purposes. Finally, almost half of the respondents have used salary subsidy and personal income tax exemption initiatives offered by the Government.

The trend of employee reduction has also improved when compared to the April’s survey. During the current survey, more respondents indicated that they plan either no reduction or smaller reduction in the headcount. 75% of the respondent companies who suspended their business activities during the quarantine were able to renew operations. Closed borders remain the major constraint for 51% of still closed companies hampering them from restoring their operations.