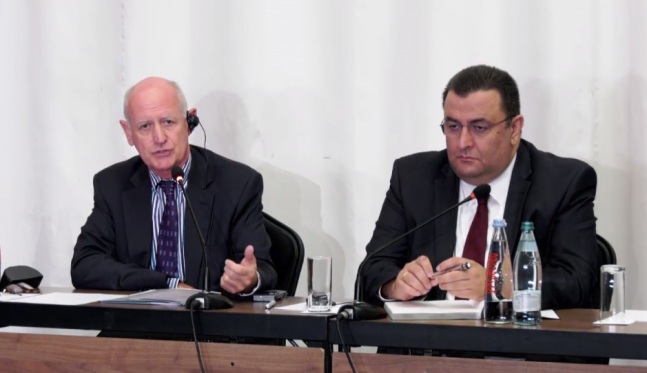 This article first appeared on londonlovesbusiness.com.

The legal team representing the founders of JSC TBC Bank, Mamuka Khazarade and Badri Japaridze, held a press conference in Tbilisi, stating that they already have enough evidence to bring a case at the European Court of Human Rights regarding the treatment of Khazaradze and Japaridze. The Georgian legal team has been joined by two highly respected international lawyers, Steven Kay QC of Bedford Row Chambers in London and Vincent Berger from Paris. It is understood they will be closely involved in the case going forward, especially around protecting the interests of Khazaradze and Japaridze abroad.

Georgian lawyer Zviad Kordzadze explained: “The case against Mamuka Khazaradze and Badri Japaridze went well beyond the jurisdiction of Georgia. The prosecution has already filed several petitions with the UK in this regard. At the same time, we already have materials in the case by which we may apply to the European Court of Human Rights Strasbourg. That’s why we involved two very experienced and qualified international lawyers in the case”, Kordzadze explained.

The international community in Tbilisi have voiced their concerns that the case against the two men is politically motivated. The fact that the fraud charges brought against Khazaradze and Japaridze came after Khazaradze’s announcement that he would be forming a new political movement intensified those concerns. The fact that it is an 11-year transaction that has been examined as also aroused suspicion that the case is politically motivated. The UK embassy released a statement on the case, as did the US embassy

As well as fearing the case is politically motivated, alarm has also been raised over the conduct of the Prosecutor General’s Office in the lead-up to a key court date. Khazaradze and Japaridze released a joint statement this week, saying that the Prosecutor’s Office summoned the representatives of the diplomatic community to a closed meeting on September 6, where the findings related to the Khazaradze-Japaridze case, prepared by two international experts hired by the same Office, would be presented.

“The Prosecutor’s Office is trying to shift the responsibility for their politicized decision, which has no legal basis, to the diplomatic corps”, they stated.

The 6 September closed briefing for diplomats was scheduled six days before Mr Khazaradze and Mr Japaridze’s court appearance, which had been set for 12 September. The timing of the meeting had drawn criticism among the international community, who considered the timing deliberate and an opportunity to shape perceptions of the case outside of the proper forum of the court room.

Not long after Mr Khazaradze and Mr Japaridze released their statement, the General Prosecutor’s Office hastily postponed their invitation, suggesting the closed meeting would be at a later date in September due to “logistical reasons”. In parallel, the two men’s court date was postponed to 10 October, raising concerns that the General Prosecutor’s Office was planning the same “advance preview” for the diplomatic community with a similar window of time before the new court date.

The Prosecutor General’s Office denies that there was to be a closed meeting for the diplomatic community, stating: “As for the information spread by the defendants about the so-called closed meeting scheduled for September 6, we would like to state that no such meeting has been scheduled. The report prepared by highly qualified foreign experts will be introduced to international organizations, diplomatic corps accredited in Georgia and other stakeholders.”