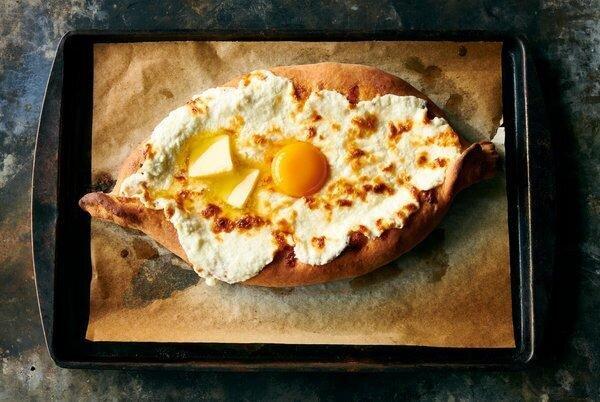 As the publication writes, there are many different styles of khachapuri, the signature stuffed cheese bread of Georgia, but most are made by wrapping a pile of cheese in a round of dough, then baking until the cheese is molten.

According to the New York Times, the most famous khachapuri is from Adjara, a region of Georgia on the Black Sea.

“It’s an open-faced, boat-shaped loaf that’s often served with an egg yolk and a slice of butter to stir in at the table. Traditionally, tangy imeruli and sulguni cheeses are used, but they are difficult to find in the U.S. This recipe, which is adapted from “Georgian Khachapuri and Filled Breads” by Carla Capalbo (Pallas Athene Publishers, 2018), uses a blend of mozzarella, feta and goat cheese”, - the New York Times writes.