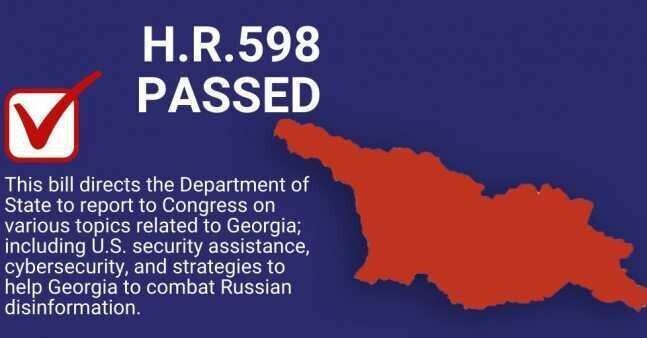 This standalone legislation was introduced in this Congress by the Georgia Caucus co-chairs — Congressman Gerry Connolly (D-VA) and Congressman Adam Kinzinger (R-IL) with bipartisan support from 31 co-sponsors. When voted on, the bill received unanimous support.

The Act declares the United States’ continuous support for the independence and sovereignty of Georgia, affirms U.S. opposition to the occupation of Georgian territories by the Russian Federation and its aggressive actions in the region, recognizes Georgia’s commitment to democratic values, and directs the U.S. government’s defense and security cooperation to enhance Georgia’s deterrence, resilience, and self-defense.

The Act also condemns ongoing detentions, kidnappings and other human rights violations committed in the regions occupied by the Russian Federation, including the recent killings of Georgian citizens Archil Tatunashvili, Giga Otkhozoria and Davit Basharuli, and calls for the safe and dignified return of internally displaced persons and refugees, all of which are important for lasting peace and security on the ground.

“This act expresses Congress’ support for the vital U.S.-Georgia partnership, which is a strategically important relationship in a very critical part of the world,” Congressman Gerry Connolly noted that by passing the bill, the U.S. reiterates its firm support for Georgia’s development and its sovereignty as he believes Georgia is a key NATO ally.

“Georgia has been a strong ally to the United States and ensuring their territorial sovereignty is essential to European security and U.S. interests,” underlined Congressman Adam Kinzinger at the Georgia Support Act hearing on October 22nd. “Passage of this legislation is an opportunity to show our support for an ally who has been one of the greatest contributors to the U.S. mission in Afghanistan and one that has endured Putin’s belligerence for over a decade. By deepening U.S. — Georgia security cooperation, we send a clear signal to Putin to think twice before interfering in Georgia again,” he said.

Congressman Eliot Engel, Chairman of the House Committee on Foreign Affairs, noted, “I personally, I have said that many times, think that the West made a mistake back in 2008 when Georgia tried to become part of NATO and was turned down. I believe that both Georgia and Ukraine should be part of NATO, and I think this is very important, and I think that is the part of the reason why we see such Russian aggression in both Ukraine and Georgia… People of Georgia need to know that the United States Congress stands with them against Putin’s aggression.”

The Georgian government and Parliament hailed the U.S. House of Representative’s approval of the Georgia Support Act. “We wish to upgrade Georgia-U.S. trade and economic cooperation to the level we currently have in defense and security. It is very important that the bill speaks about the significance of signing a free trade deal between Georgia and the U.S.,” said the Foreign Minister of Georgia David Zalkaliani, adding that before the passage of the bill 28 U.S. congressmen appealed to U.S. trade representative to take actions towards signing the free trade agreement.

The Georgia Support Act will be submitted to the Senate for action and then to the U.S. President for signing after which it will be enacted.

Source - Embassy of Georgia to US