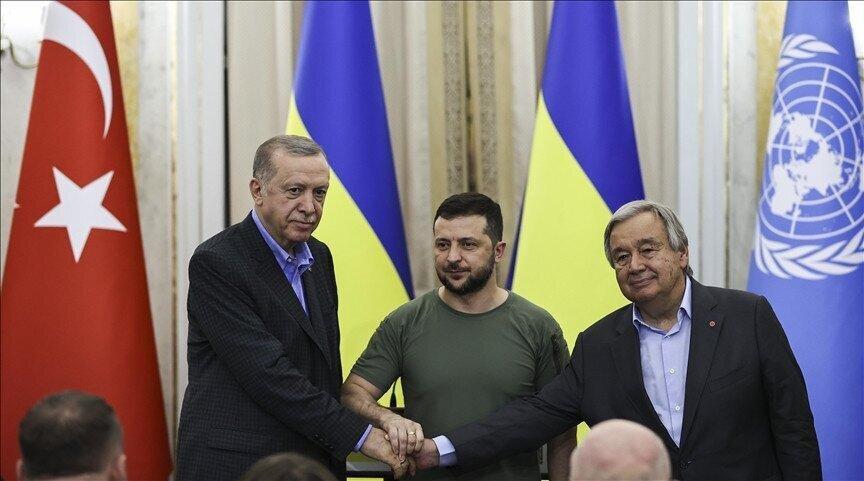 Türkiye's president on Thursday voiced concern on the clashes around the Zaporizhzhia nuclear power plant in Ukraine.

"We expressed our concern about the ongoing conflict around the Zaporizhzhia Nuclear Power Plant. We do not want to experience a new Chernobyl," Recep Tayyip Erdogan said at a news conference after a trilateral meeting with his Ukrainian President Volodymyr Zelenskyy and UN Secretary-General Antonio Guterres.

Erdogan, Zelenskyy and Guterres gathered in the Ukrainian city of Lviv to discuss steps that can be taken to end the Ukraine-Russia war through diplomatic means and maintain a mechanism recently established for the export of Ukrainian grain to world markets.

"During our trilateral meeting, we also evaluated the possibilities of transforming the positive atmosphere created by the Istanbul agreement into permanent peace," Erdogan said.

Erdogan said the entire world had begun feeling the "positive effects" of the agreement, which enabled the safe export of Ukrainian grain via the Black Sea to the rest of the world.

On July 22, Türkiye, the UN, Russia, and Ukraine signed a deal in Istanbul to reopen three Ukrainian Black Sea ports for exporting Ukrainian grain stuck due to the military conflict, which is now in its sixth month.

Erdogan said they had discussed ties at the strategic partnership level with the Ukrainian delegation, covering all the dimensions and prospects to advance cooperation and solidarity. He also reiterated Ankara's strong support for Ukraine's territorial integrity and sovereignty.

He said Türkiye is working to end conflicts diplomatically, adding that Ankara has "stood by our Ukrainian friends and we continue to do so."

During his bilateral meeting with the Ukrainian leader, Erdogan said he told Zelenskyy that Türkiye would provide the necessary support for the war-hit country's reconstruction, as it has done so far.

Türkiye has dispatched 98 humanitarian aid trucks to meet the urgent needs of Ukrainians, he said. "We've been temporarily hosting nearly 325,000 Ukrainians. We've admitted a total of 1,507 people, including 1,099 orphans and 408 care staff, until conditions in Ukraine return to normal."

'What matters is to find shortest, fairest way to negotiating table'

Erdogan pointed out that the international community should assume greater responsibility for the revival of the diplomatic process between Russia and Ukraine.

"What matters is to find the shortest and fairest way to the negotiating table," he said.

Expressing his belief that the war would eventually end at the negotiating table, Erdogan said that Zelenskyy and the UN's Guterres also held this view."

He underlined that during their trilateral meeting, they had also discussed the exchange of prisoners of war, an issue to which Türkiye attaches "great importance."

"We're ready to act as a facilitator or mediator towards the goal of reviving negotiations upon the parameters that took form in Istanbul," he said.

Türkiye will discuss the outcome of Thursday's meetings with Russian President Vladimir Putin and the Russian side, he said.

Speaking at the news conference, Guterres said the landmark grain deal in Istanbul had been signed to help vulnerable people in every corner of the world.

"Since the Russian invasion of Ukraine, I have been clear: There is no solution to the global food crisis without ensuring full global access to Ukraine's food products and Russian food and fertilizers," said the UN secretary-general.

Guterres said he was pleased that the first UN-chartered vessel carrying Ukrainian wheat was on its way to respond to the needs of people suffering from the "worst drought" in decades in the Horn of Africa.

"Getting food and fertilizer out of Ukraine and Russia in larger quantities is crucial to further calm commodity markets and lower prices," he said.

For his part, Zelenskyy said Türkiye and Erdogan played a "leading role" in the grain shipment deal, which has helped tackle the global food crisis, AA reports.