What drives Georgia's economic growth? - Interview with the Executive Director of Geostat 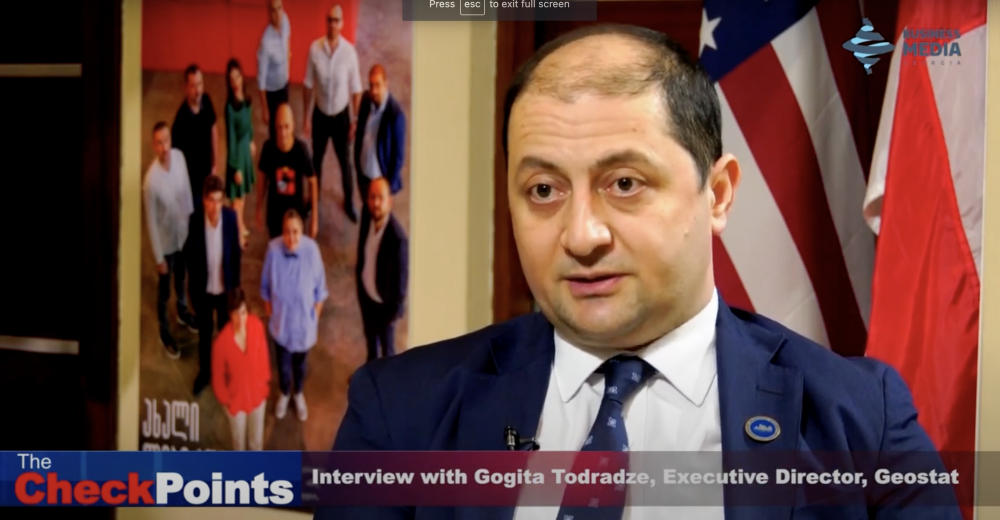 Back
What drives Georgia's economic growth? The economy overall posted 10.6% of economic growth in 2021 December. The estimated real domestic product growth rate was 9.6%. The Checkpoints followed up on the figures with Gogita Todradze Executive Director at the National Statistics Office of Georgia.
Elene Kvanchilashvili: We will be talking about the economic growth figures that your state has published recently. We have two-digit economic growth. What does this figure tell in the current context of the pandemic?

Gogita Todradze: First of all, thank you very much for inviting me and for having this opportunity. As you are aware, in December 2021 estimated real GDP growth rate amounted to 9.6%, and the annual average real GDP growth rate is around 10.6% compared to the same period of the previous year. In 2021, we have two-digit economic growth. When we are talking about the drives of Georgia's economy today, first of all, I think we need to pay particular attention to the tendencies existing in external trade statistics. As you are aware, in 2021, the total volume of export amounted to 4.2 Billion US dollars, which is about 26% higher compared to the previous year, while domestic export exceeded three billion U.S. dollars, which is 30% higher compared to the previous year. It is worth also mentioning that the total turnover of VAT taxpayers, which was used for the calculation of economic growth rates, exceeded 11 billion five hundred million Georgian lari, which is 31% higher compared to the previous year.
Elene Kvanchilashvili: So we could say that trade and VAT turnover were the main drivers of this growth. Can we eliminate the base effect when we are talking about this two-digit economic growth?

Gogita Todradze: Definitely. A base effect is also relevant because as you are aware in 2020, real GDP declined by 6.8%. That means in 2020, the level of GDP was quite low.

Elene Kvanchilashvili: Compared to 2019, we still have growth, right? So what does that mean? Can we say that the economy still maintains some kind of resilience towards this pandemic and it is on the post-pandemic growth track?
Gogita Todradze: Compared to 2019, we still have economic growth, but this is around 3.1 %. In this case, the main drivers, main contributors, are manufacturing financial intermediation, retail and wholesale trade, and information and communication sectors.

Gogita Todradze: In manufacturing, namely metallurgical industry, especially steel, iron, and ferroalloys production at the same time, production of mineral fertilizers, beverages, and some chemical products are noteworthy as well. Those products greatly contributed to the economic growth in 2021. In terms of the transportation sector, I would like to highlight both land and air transportation activities, but mainly freight transportation. Also, as you are aware, this sector is highly correlated with external trade statistics. In terms of wholesale and retail trade, the trade turnover of the motorcar, I mean, import and export of motor cars in different countries from Georgia, also, trade with petroleum products, pharmaceutical products is noteworthy. Also in terms of the energy sector growth was related mainly to the production of electricity by hydropower plants. As you are aware, in December 2021, electricity generation increased by 55% percent. And by the way, consumption of electricity was increased as well by 26-27%.

Elene Kvanchilashvili: What does this two-digit economic growth considering everything that we have talked about tell investors at this point, what is your take on that?

Gogita Todradze: Actually, this is not a typical question to Geostat. I think the Ministry of I think Ministry of Economy or Ministry of Finance would provide more adequate and comprehensive answers. However, in my point of view, I think current economic growth figures and existing key macroeconomic indicators give more reason for interest and optimism in the future.
economic growth Geostat georgian economy