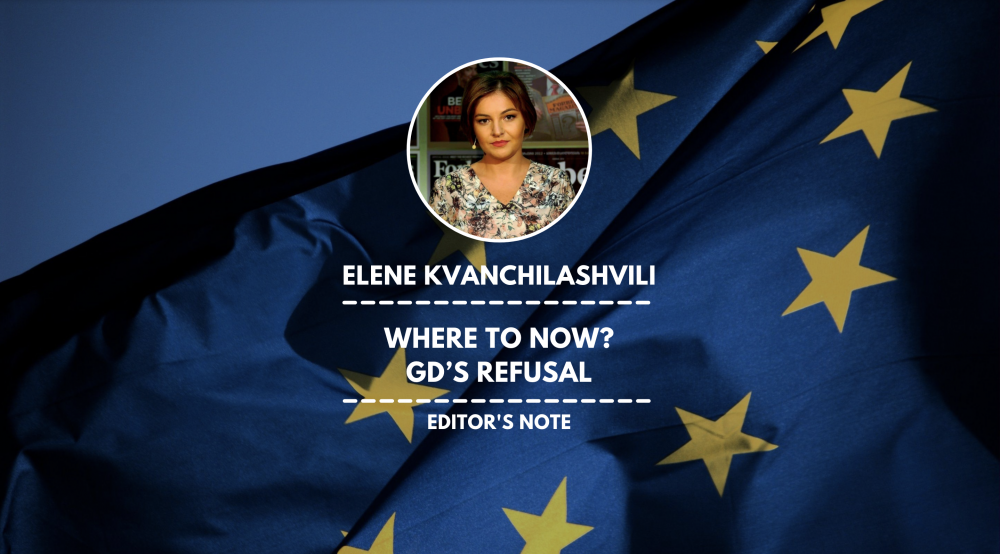 Back
Author:Elene Kvanchilashvili
Georgia refused EUR 75 million loan from the European Union, conditioned on the court reform and upholding EU-brokered April 19 deal. Such is the final decision and responsibility of the Georgian Dream and Prime Minister Irakli Gharibashvili.
The Prime Minister’s words come a day after the Ruling Party Chair Irakli Kobakhidze announced the EU’s macro-financial assistance “lost its economic significance” since the economy saw a far bigger growth than initially expected, bringing an additional GEL 1 billion to the budget.

Later, PM Gharibashvili reiterated the same reason, adding: “This issue gained a huge political significance. We have decided to refrain from the second tranche of the EU macro-financial assistance” and “we are very thankful to the EU for all of the help, including during the pandemic management, and in general, for everything they have done for us.”

EU’s RESPONSE
The European Union said while it respects the Georgian Government’s decision not to ask it the disbursement of EUR 75 loan, “Georgia failed to sufficiently address the condition for this macro-financial assistance and notably, to increase independence, accountability and the quality of the judicial system.”

The EU warned earlier it would withhold the aid should the Georgian Government fail the court reform condition. On his latest visit to Georgia, Charles Michel -European Council President - who led political crisis mediation efforts in Georgia, made it very clear that the EU might cut EUR 75 million loan if Georgian authorities fail the court reform and refuse to commit to the April 19 EU-brokered deal.
PM Gharibashvili’s announcement that Georgia has decided to refuse EUR 75 million loan from the European Union came a day before the deadline for the EU’s decision to stop the assistance to Georgia if it failed the reform condition.
US RESPONSE

US Ambassador to Georgia commented on the Georgian government’s decision not to take EUR 75 million assistance. Kelly Degnan said it was a surprise amid the high unemployment and poverty rate in Georgia.

“We were a little surprised that the Government of Georgia’s statement that Georgia doesn’t need EUR 75 million in assistance, despite the high unemployment and poverty rate and of course the impact of COVID. I’m sure Washington will take note of that as well. What my understanding is that this assistance was tied to important judicial reforms. And that was clear last year when the package was discussed between the European Union and the Georgian government. So again, these are important reforms that need to be made and we hope that that will continue to be the case. Of course, there are difficult reforms, and some good reforms have been made, which is very encouraging and, again, it’s now important that whether it’s tied to EUR 75 million or not that these reforms are made.

The United States Congress is watching what happens here, and we always coordinate with the Georgian government as to what kind of support they need and want. And so, I’m sure they will take note of the government’s statement that they don’t need EUR 75 million in assistance,” Kelly Degnan said.

MESSAGE FROM MOSCOW
Russian Foreign Minister Sergey Lavrov said Moscow is ready at any moment to have normal neighborly relations with Georgia if it wants to, provided Tbilisi doesn’t “play the Russian card to save its Western patronage.”
In his remarks with the students at the Moscow State Institute of International Relations (MGIMO), Lavrov said Russia had considered granting Georgia visa-free travel but “decided to hold back the possibility after not receiving any kind of apology” for the anti-occupation unrests of June 20, 2019, in Tbilisi.
VOICE OF INT” L COMMUNITY
MEPs Viola von Cramon (The Greens/EFA, Germany) and MEP Andrius Kubilius (EPP, Lithuania) slammed the GD government’s decision to refuse the EUR 75 million loan. MEP von Cramon argued that Georgia had not fulfilled the conditions anyway. “You can’t decline what you were not eligible for,” she tweeted.

The EPP MEPs are “traditionally in solidarity” with the UNM and make “biased statements” without looking into the issue first, PM Garibashvili commented.
“A Member of the European Parliament is not my boss,” PM Gharibashvili stated, stressing that “Our bosses are the Georgian people” and adding: “if MEPs are actually interested in understanding the situation and the substance of the issue, they should look into it instead of making shallow statements.”

Claiming that Georgia’s judiciary is “well ahead of the courts of the European Union Member States,” PM Gharibashvili reiterated that the Georgian government refused the conditional loan to avoid the “political insinuations and speculations.”

PM Gharibashvili accused the opposition of pushing the EU towards using the conditionality mechanism, noting that “our opponents have moved to the regime of sabotage to somehow… hinder our course towards the West.”
“It is a tragedy that former President Saakashvili is guiding EU institutions — as you know he is member of the EU people’s party, EPP group — and spares no effort to bring sanctions and obstructions against us,” the Prime Minister noted.
Today – 2 September 2021 - the UNM opposition party signed the April 19, EU-mediated agreement proposed by European Council President Charles Michel after months of refusal to join it.
EU Delegation to Georgia posted photos of the UNM leaders signing the Agreement with the caption: “Signature of the Agreement "A way forward for Georgia" of 19 April by the Chair of UNM Nika Melia, on behalf of the UNM party, by faction leader Khatia Dekanoidze and by individual UNM MPs”.
US Ambassador to Georgia Kelly Degnan also welcomed the largest opposition United National Movement (UNM) party’s decision to sign the EU-mediated agreement and stated that ‘it is a good sign for strengthening Georgia’s path forward.’